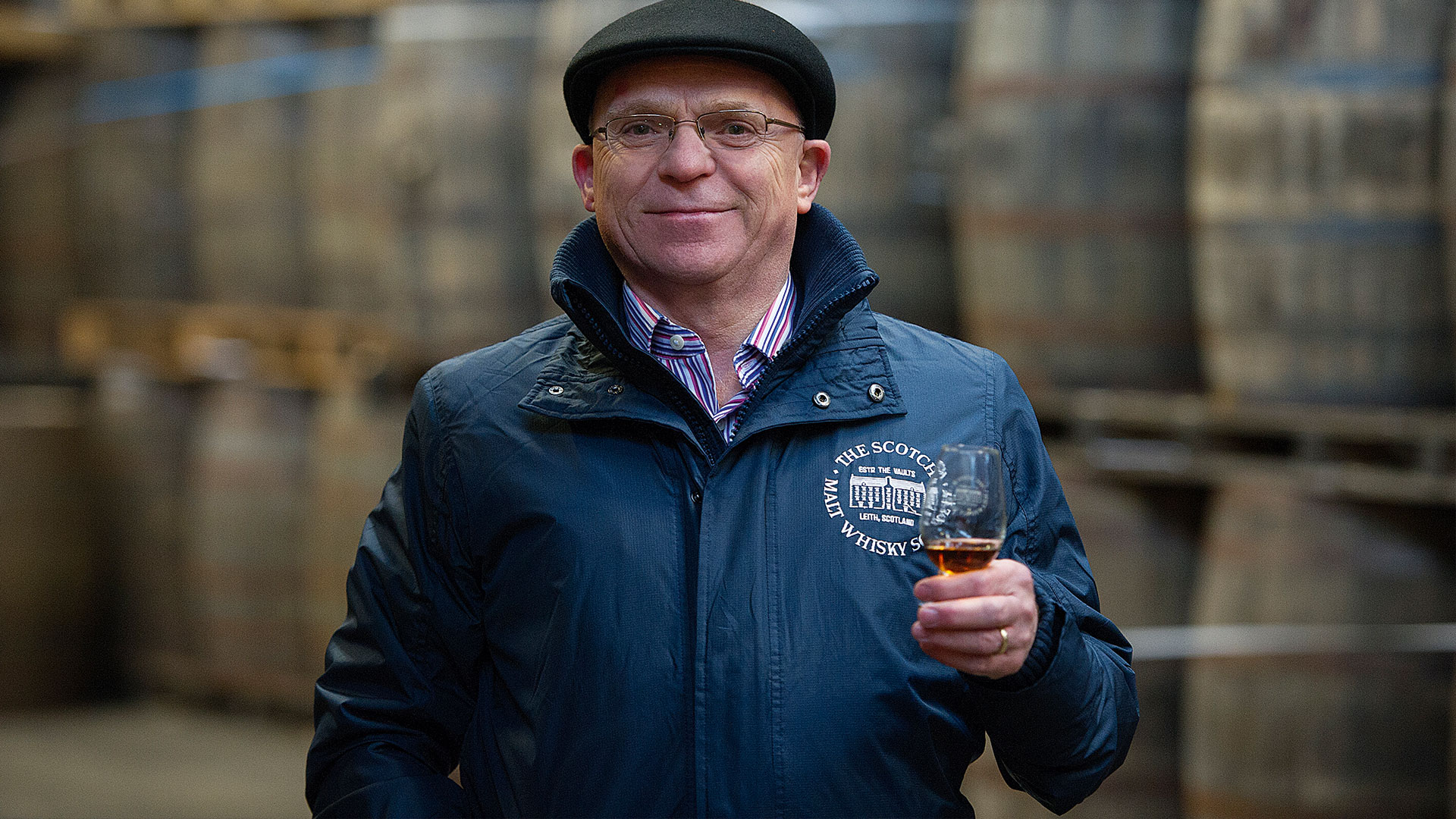 “The Aroma of a single Moment”

Green bottles, a number code, plus tasting notes such as "Naked in the forest" or "Bloodshed in the old sawmill" on the label: They are the trademark of the Scotch Malt Whiskey Society (SMWS), the largest independent bottler of single-barrel Scotch worldwide.

A a very special note: the products are produced almost exclusively for members, because the SMWS is also the largest whiskey club in the world - which is being presented at the BOTTLE MARKET for the first time in Bremen. An extraordinary concept. BOTTLE magazine talked about it with brand ambassador John McCheyne as well as about the peculiarities of single-barrel whiskey and the future of Scotch.

BOTTLE: How did the SMWS come about?
JOHN McCHEYNE: In the beginning there was a small single barrel of Glenfarclas in the late 1970s. A whiskey fan got hold of this barrel - Phillip "Pip" Hills in Edinburgh to be precise, after a friend introduced him to the Grant family from Glenfarclas. It was a rarity at a time when blends were still dominant. Hills invited all of his friends to fill up whiskey - and they enjoyed it. A few years later, the decision was made to found the association to bring the joy of single casks closer to even more people.

What is so special about single malt from single barrels?
This is an absolutely natural product. Every single barrel is different. This is due to the wood, what was previously stored in it, the climate and the distillery-specific production processes. The miracle of a single keg is that the taste of a single moment is captured. And there can be something very emotional about drinking a single cask whiskey if you associate something meaningful with that moment. Incidentally, such a whiskey is the best for me: one that is more than a drink that arouses emotions.

Does the SMWS despise blends?
No, not at all - that's a matter of taste. I myself sometimes drink blends, there are good ones out there! Incidentally, the SMWS has also bottled some recently, for example whiskey from various sherry barrels or lslay types that we have called 'Exotic Cargo' and 'Peat Faeire'. We also made a cognac blend.

And how did the members like it?
They were enthusiastic, so much so, that we will occasionally continue to add blends and other spirits to our program. We want our members to have a wide variety of experiences. A single barrel is an experience all of its own. Other varieties complete our range, they do not replace it.

How does the SMWS find interesting brandies?
There are different ways: The Spirits Team of the SMWS talks to distilleries about their barrels, sometimes a distillery approaches us or one of our members offers us a barrel that they bought a few years earlier. For SMWS and other independent bottlers, it can be difficult to get something from some distilleries because they prefer to keep their kegs themselves. It is very difficult, for example, with Glenfiddich and Talisker. But we have barrels from 130 distilleries in our warehouse. When we think about filling something, the Spirits team first tastes the whiskey and, if it has been found to be good, passes it on to our actual tasting panel.

How is this jury composed and how does it work?
Such a jury consists of six to seven members. We can choose from around 20 external experts for the appointment. The panel meets twice a week and then tastes around six to ten whiskeys. The chairman then summarizes the assessments in tasting notes. What the jury endorses, we include in our bottlings, put the notes on the bottle label and publish them in our monthly member magazine "Outturn". We bottle a total of 500 kegs a year.

The SMWS keeps the identity of its members top secret. Why?
The juries are always made up of different people. The tasting notes for the various bottlings are from many different experts. It would not be helpful if these people were constantly asked to explain why they said this or that if they were not involved in the evaluation of a particular bottling. But I can tell you two of them, good jury chairmen, because they are very eloquent and known beyond Scotland. One is Charles MacLean, who has published nearly 20 whiskey books. The other is also known as "The Whiskey Bard": It is the folk musician and author Robin Laing.

The SMWS also keeps a secret about the distilleries. They are not mentioned on the label, but are hidden in a number code. Why? And how do you read the code?
Two reasons: Our members shouldn't try a variety just because they wouldn't like the whiskeys from a particular distillery. Some distilleries also want to keep brand control. Single cask bottlings taste different from the usual products of these distilleries.
That is why they only sold their kegs to bottlers and blenders when their name is not mentioned - that was especially so in the 1980s. But now to the code. Our first bottling was - of course - a Glenfarclas and it got the number 1.1, whereby the front 1 stands for the distillery, the back for the first barrel from this production. Beyond that, we do not comment. But here's a tip: We hide small hints in the tasting notes on the bottles. And lists are circulating on the internet ...

Today we speak of the five whiskey regions Lowlands, Highlands, Speyside, Islay and Campbeltown. How are they different?
The classification has grown over many generations and summarizes certain flavors. Accordingly, Highland whiskeys are considered to be particularly spicy, with Speyside, for example, sweetness and fruitiness are associated, with Islay varieties notes of peat. But it's also about marketing. You can find Speyside peated whiskeys, of course, and unpeated lslays. Regional thinking emerged over time in response to the demand from blenders who expected certain flavors from distilleries. But distilleries in all regions can and are innovative. Also, some say that there is something very fascinating about the location of a distillery that cannot be repeated anywhere else.

The SMWS presumably does not have any regional focus - but which origin do you particularly value?
I really like lslay whiskeys and especially Laphroaig. This is where the feeling that I was talking about comes into play. The Laphroaig distillery was the first distillery I ever visited - in 1983, the year SMWS was founded. It's a great story - I'm looking forward to telling it to our German members. The visit back then was a very nice, friendly experience. Every drop of Laphroaig reminds me of that.

How is the Scotch industry doing right now?
Many say that bourbons and Irish whiskeys are booming right now. But Scotch sales are actually going up, a total of 7.8 percent and single malt in particular by 11.3 percent. The latter has become a huge phenomenon that distilleries have to go to great lengths to meet demand. You can also judge the situation by the fact that there are currently more than 120 distilleries in Scotland. 16 of them have opened in the past two to three years alone and further openings are foreseeable. In the UK we have 900 billion liters of rain a year. We go to great lengths to turn as much of it into whiskey as possible! Especially since we grow more barley per hectare of land than in any other country.

Are there any innovative developments?
We need to respect the rules in force about what whiskey is. Some other countries, unlike Scotland, have less strict guidelines or no guidelines at all for what can be called whisk (ey. For example, we are not allowed to add flavorings. Of course, our distillers experiment with barley varieties, yeasts and peat, or the production process. In particular, they rely on working with different barrels for innovations. Most single malt distilleries have different styles on offer.

Would you say Scotch is better than American or Irish whiskey?
Some will say I'm biased. But I like the idea that this is a broad field and that some varieties from the USA, Ireland or other countries are excellent. It is always difficult to compare - for example, when looking at a premium US bourbon and an entry-level Scottish blend. Scotch has advantages because of its history, the method of distillation and the enormous variety. Whiskey has been part of life in Scotland for hundreds of years. But I would never say: "Never try anything else"! The Westland Distillery in Seattle / USA, for example, produces a great single malt, and the John Paul Destillery in India also produces first-class whiskeys. I have also drunk bad scotch, on the other hand. It happens, but not often.

Which non-Scottish whiskeys have surprised you the most in recent years?
The aforementioned Westland, but also Armorik from France or the whiskey from Mackmyra in Sweden, St. Gorges in England and the Irish Midleton Barry Crockett. My favorite German whiskey is Slyrs - maybe the SMWS will buy a barrel one day.

If you could only buy one SMWS bottle - which one would it be?
The one with the number 29.156 - of course a Laphroaig, this one was stored in a sherry barrel. Unfortunately, it's sold out. I wish I had bought a box. Well, on the other hand we experience new taste revelations every month at SMWS.
Read article as a pdf
EN